My 2016 brochure is out now and bookings are open! 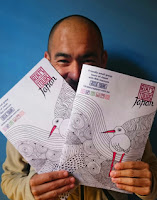 It took a bit longer than I had hoped, but my 2016 brochure is hot off the press. I'd like to thank Leonie Cheetham, who produced all the illustrations for us. It looks fantastic, and as one of my past travellers, you really captured the feeling of Japan and my tours in your work. Thank you Jason for doing all the layout too. If you would like a brochure mailed to you, go to this link.

With my brochure out and website updated, bookings for 2016 are now open. All my tours have availablitiy, but some are selling quite fast. Classic Sakura for instance has just two twin spots remaining. All my tours have been tweaked for 2016, and I have two brand new tours. Tohoku Sakura takes in the cherry blossoms of northern Japan in late April, and Earth & Fire is a ceramics and art tour of western Japan in October. I'm really looking forward to them. Both of my walking tours have also been extended by popular demand. 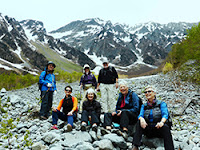 It's been a while since we returned, but I would like to thank all my fellow travellers who joined me on my City Lights & Alpine Trails tour, and North to Kamui Mintara tour in May and June. This time, we had great weather at Kamikochi, so some of us did the extended climb to Dake-sawa, for views of the valley (pic right). For my northern tour, we also had fine weather all the way to Kamui Mintara, so could enjoy many nature walks with blooming azaleas and other flowers.

In my off-season, I joined a tour of the West McDonnell Ranges in Central Australia with Trek Larapinta. I did a 6 day trek of the Larapinta Trail with three friends, fully supported by two wonderful guides, Sean & Warren. They cooked great meals, and kept us safe on the remote tracks. A particular highlight was sleeping in a swag under the stars for one night!  Like my tours, they have a maximum of ten people, and we had a very nice group. I highly recommend Trek Larapinta!

Posted by Riki's Tours Japan at 8:26 PM No comments: