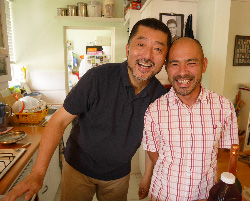 Happy New Year everyone! I've just woke from a nap to sleep off a little more of last night's celebration. I think I enjoyed it a little too much. This morning though, I was lucky to join my dear friend, Masa-san (on left) in Sydney for a Japanese New Year's breakfast. Traditionally, we have Ozouni, which is a clear soup with rice cakes, and also other things like seafood and root vegetables...
As a kid growing up in Kyoto, I remember watching the popular music program kohaku uta gassen on television with my family on New Year's Eve. We would also visit a local temple around midnight to hear the bell being tolled. Unlike Australia, fireworks are not commonly seen on New Years Eve in Japan. Although last night's fireworks in Sydney were spectacular, I'm not really sure what it's for or if it's needed...

Most spots for the first part of 2016 have now sold out, which is great news for my little company. However, there is just one twin spot remaining for a lucky pair on my Tohoku Sakura tour, which takes in the beautiful cherry blossoms of northern Japan... Later in the year, my Earth and Fire tour in October (for ceramics and art lovers), and my Autumn Colours tour in November still have places available too.

2015 was quite a big year for me with every tour selling out, and a couple of private tours held as well. I'd like to thank all my fellow travellers who have made my business possible and given me many great memories and experiences... We changed many things in the way we operate as well, upgrading from sole trader to company status in the middle of the year, and also updating our accounts system. I'd like to thank Jason Longmore, who helps me with so much of the back-end work. 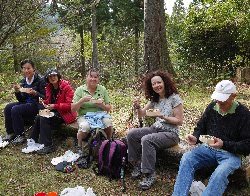 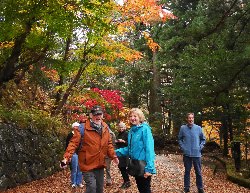 I enjoyed two of my favourite tours a lot at the end of 2015: the Autumn Colours tour and Spirit of Japan walking tour. A particular highlight on my Autumn Colours tour was staying at Benesse House on Naoshima Island, where the food and views of the inland sea were excellent.... On my Spirit of Japan tour, it was great to see Cathy-san and Peter-san again (taking bento lunch break above right). It was also fun to see the way my four fellow female travellers enjoyed the riverside hot spring at Kawayu Onsen. Thank you for walking the Kumano Kodo with me.